skip to main | skip to sidebar

A Babe is Born

On December 1, 2006, my baby boy was born. I felt like Mother Mary only without the Immaculate Conception. 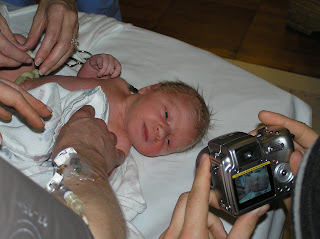 I gave birth to a precious soul and in the process my life took on new purpose. My heart expanded. My joy exploded. My Mother Self engaged. My SHINE ignited.

Yes – I was shiny before, but when Biddy came into this world, my SHINE took over. It’s amazing how it happened, in an instant, as soon as he was laid on my chest. His blue eyes and sweet love allowed me to SHINE, demanded me to SHINE, for him and for my Self.

Before his arrival my path was somewhat aimless, wandering, and fueled by insecurity and indecision. Before his arrival I was selfish. Since his arrival three-years ago, I have become childish–childish in the sense of caring completely for my children – my son and my little Kimi.

Sometimes you need a catalyst to SHINE. Biddy is my catalyst. Thank you my boy for gracing me with your presence. I love you more and more and more each day.

Posted by kimshannon at 10:51 AM No comments:

I Left My Heart in San Francisco

I LEFT MY HEART IN SAN FRANCISCO (Tony Bennett)

The loveliness of Paris
Seems somehow sadly gay
The glory that was Rome
Is of another day
I've been terribly alone
And forgotten in Manhattan
I'm going home to my city by the bay.I left my heart in San Francisco
High on a hill, it calls to me. To be where little cable cars
Climb halfway to the stars!
The morning fog may chill the air I don't care!
My love waits there in San Francisco Above the blue and windy sea
When I come home to you, San Francisco, Your golden sun will shine for me! 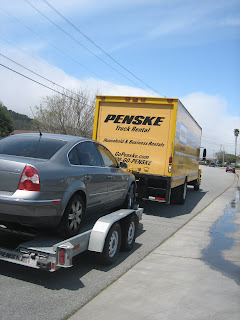 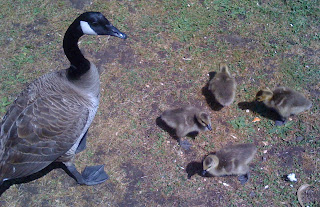 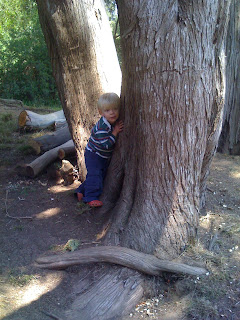 We smelled magnificent flowers. San Francisco is blooming. It's vibrant. What a beautiful time of year. We're going to miss it. 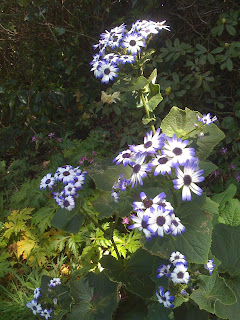 This post is excerpted from an email I wrote to our San Francisco community on April 23, 2009.
I don't really know how to say this so I'm going to come right out and say it.
On May 19, B, Biddy and I are moving to Colorado. We are very excited about our new adventure. We will definitely be leaving a piece of our hearts here in San Francisco–a city we truly love. We met here, Biddy was born here, we have beautiful friends and family here, we grew and prospered here -- we have lived an amazing life here.
We've been talking about making this move since I was pregnant, so we've definitely mulled this decision over. Since Biddy is now 2 1/2 and almost ready for preschool, we agree that now is the right time. We both want him to have a backyard and a street on which he can ride his bicycle, and right now we're unable to give him that here in San Francisco.
We also have a ton of family in Colorado. My mom, my dad and stepmom, my two step brothers, a bunch of Brandon's uncles, cousins, and his Godfather. His mom is even moving back when she retires in two years (she grew up there) and his dad is only a short RV ride away. We want Biddy to grow up with his grandparents. He deserves that. They come to visit often but it isn't the same as being right down the road.
So we are moving. We gave notice on the apartment last Tuesday and B gave notice at work last Wednesday. We have less than one-month to pack up and say our goodbyes. Goodbyes that will be difficult.
To all you Mamma Boo fans who check the blog regularly -- sorry for my hiatus last week. Details got the best of me but I'm now back on track for at least a sentence or two each day through the move. I'm sure you'll be gripped by the skinny of packing up five lives (don't forget the cats) and moving half-way across the country. Wish us luck!
Posted by kimshannon at 2:44 PM 2 comments:

"Mommy, go for a walk?"
"Yes Biddy, in a bit. It's a gorgeous day."
"Mommy, wear boots?"
"Biddy, I think you'll be hot and besides, they're difficult to run in. I don't want you to trip."
"Mommy, I want wear boots." he said emphatically holding his red, fire truck inspired rain boots.
"Are you sure?"
"Yes!"
"Why?"
"Puddles."
I laughed. This kid has such a good memory. Last week on an early morning walk after a big storm, we watched two kids jump with delight in each and every puddle they could find. He wanted so badly to do the same, but without his rain boots I nixed the idea saying we would go puddle jumping with boots soon. Although we've been on many walks since, neither of us have thought to don boots...until today.
"I'm not sure how many puddles we're going to find Biddy. It hasn't rained in a while."
"Let's go see."
"Okay, honey. We'll go on a puddle jumping adventure."
"Yes Mommy. Let's find puddles and jump."
An hour later, that's exactly what we did! (Sorry for my off-key singing mid-video. I got caught up in the Gene Kelly moment!)
Posted by kimshannon at 2:22 PM 2 comments:

Biddy and I finger-painted the other day.
In order to prepare, I took Biddy's pants and socks off, changing his diaper in the process (out of courtesy and habit), and put on an almost-too-small shirt we didn't mind getting messy. I also swept the kitchen floor to rid any fallen crumbs. We got out his paints. He has a set we've used before when making a Father's Day masterpiece but he wanted to use his new paints–the ones he'd been given for Christmas. We then got out the big roll of kraft paper.
I laid two pieces of paper on the linoleum. Biddy was giddy as I opened each tube, removing the foil seal, allowing the paint to flow freely. He began by squirting a big dollop of red and then gleefully smearing it. Blue was next–squirt then smear. Green–squirt, smear. Yellow–squirt, smear. And round-robin to red again.
While Biddy was soaking his sheet of paper with color, I daintily tried to channel Monet and make a masterpiece of my own. I quickly abandoned being Monet's apprentice however, as I got so absorbed in Biddy's process. He was fascinating to watch. He would apply color and then thoughtfully consider where the next hue would go. Sometimes he used a broad stroke while other times a simple finger swirl would do. 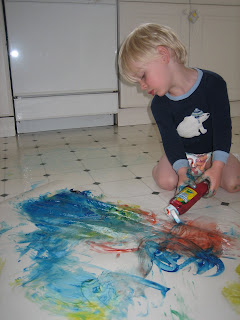 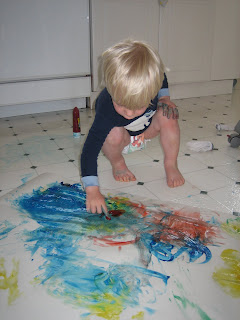 At one point, we thought it would be fun to make footprints so Biddy stood up and stepped in the red. Squishy and cold between the toes. I wanted him to walk across the paper but instead, he decided to do a happy dance–half on the paper and half on the linoleum. Up until this point, both floor and Biddy were relatively paint-free but that didn't last long. As soon as his wet red foot hit the dry white floor, he slipped and slid and lost his footing. As he dropped to the ground, he began to giggle. I helped him up as he continued to giggle, and slip and slide, and fall down and giggle, and get up and giggle, and slip and slide and giggle some more. It was so funny I had to get it on video, this time with blue paint. We've watched it several times since and each time he sees himself, he giggles once more. Enjoy.
In all, Biddy made five beautiful paintings that day. Three have dried and are signed by the artist, while the fourth, his body art, washed away when he bathed, and the fifth, the kitchen floor, was mopped and scoured and is now shiny once again.
I realized, as I carried Biddy dripping with paint directly to the bath from the kitchen and again as I spic-and-spanned the floor, why we don't do this activity all too often. While prep time is a piece of cake, clean up is excessive and makes mommy grumble.
Posted by kimshannon at 3:13 PM 1 comment: